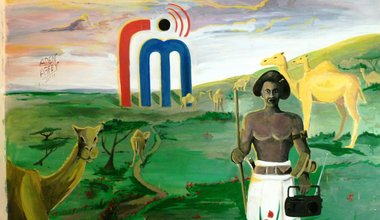 Somalis who return to Mogadishu for the first time since the conflict began 20 years ago often lament that there is little left of the beautiful, cultured city they once knew. Much has indeed changed. However, hidden in a backroom of the Information Ministry is a treasure trove of Somali history – the archives of
Radio Mogadishu.

The dark room is crammed full of reels of quarter inch tapes - lovingly filed in their dusty cardboard boxes on the shelves, spilling over onto the desks, tables and floor with their contents written by hand. There are, according to official figures, more than 35,000 tapes in the archives. More than half of them are songs but they also include drama, poetry, religious programmes, speeches and broadcasts in foreign languages including Italian, Arabic and English.

The archive collection began in 1951 – the same year that Radio Mogadishu was launched. The collection began slowly but built up over the years. Most of the songs are love songs although some contained hidden criticism of the

Governments and poets often ended up being imprisoned for their efforts. There are also welcome songs which range from one written for Communist China's first and longest serving leader, Zhou Enlai, to one which has just been composed for the UNPOS deployment to Mogadishu. Many of the songs are still extremely popular and are still being rebroadcast on Radio Mogadishu today, as are the plays and poetry.

Unfortunately the news and current affairs programs were never archived. However there is a short, historic recording of the declaration of Independence of Somalia at midnight on 1 July 1960 as well as songs written about Somali independence.

There are also more than 400 speeches by the warlord Mohamed Farrah Aideed, who overthrew Siad Barre. Both Aideed and Ali Mahdi Muhammed, the first President after Siad Barre, clearly understood the importance of the archives and sent guards to protect them against being damaged or looting in the
fighting.

The current archivist is Abshir Hashi Ali who has been there since the fall of President Siad Barre in 1991. He says very little has been archived during the past 20 years of conflict and nothing is currently being archived due to lack of capacity even though Radio Mogadishu is back up and running and broadcasting 24 hours a day.

The most pressing concern is that the condition of the tapes is deteriorating fast. Some have already rotted and are beyond repair. There have been various offers to digitize the tapes to preserve them although so far about five per cent have undergone this process. The Government is now appealing for help to preserve this important historic record.