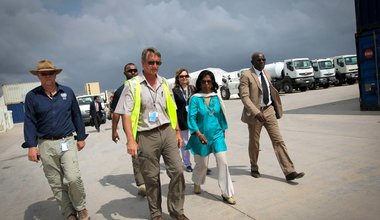 Ameerah Haq, the UN Under-Secretary-General for Field Support made her first visit to the Somali capital, Mogadishu, on Tuesday 13 November 2012, where she called on the newly elected President Sheikh Mohamud to congratulate him on on the country's recent political accomplishments.

During the visit, Ms. Haq also met with the Deputy Force Commander of the AU forces in Somalia, Maj. Gen. Simon Karanja as well as Dr. Augustine Mahiga, the Special Representative of the UN Secretary-General for Somalia, who as head of the United Nations Political Office in Somalia has played a critical role in facilitating the country's transition to a more representative political order.

"This has been a very interesting visit for me," said Ms. Haq. "What I have been able to see is that there is a great opportunity for the country to rebuild itself and to restore democracy and normalcy to people's lives. On the one hand the signs of war are still visible, but on the other I was struck by the vibrancy, momentum and dynamism in the city: small shops, commerce, billboards. It sends a strong message to the world that Somalia is open for business"

After visiting the president at Villa Somalia, Haq had an opportunity to discuss the work of UNPOS with SRSG Mahiga "UNPOS have achieved great things over the past 6 months, working with the people of Somalia, the political office here has facilitated and supported the end of an important political transition, bringing in a new constitution, a carefully selected more qualified parliament, a Speaker, President and a Prime Minister. Today alone I was pleased to hear the news that the cabinet has now been fully endorsed by the parliament. Somalia really does have the best chance that it is had in over 20 years and I applaud the work of UNPOS and the people of Somalia for having made this possible."

Ms. Haq, who took up her post as the head of Department of Field Support in June, said the trip had given her a better sense of the accomplishments that have been made so far as well as the challenges that lie ahead. "The immediate priorities are clear: military gains must be consolidated, civilian services and security sector presence must be enhanced and this needs to be done at a local level," she said. "There is also a strong need to build the capacity of the country's institutions so they can begin to deliver services to the population."She noted that there was a tremendous amount of goodwill and support from the international community for these efforts."United Nations remains committed to continuing to provide support to AMISOM and helping Somalia achieve peace, stability and prosperity," she said.