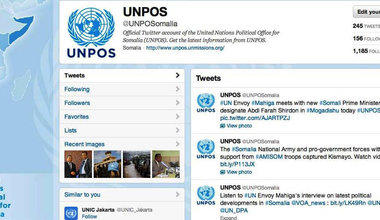 "@UNPOSomalia @UN @UN_DPA Ambassador Mahiga should be congratulated for making this possible, he worked tirelessly for a better change," tweeted by Harbi Kullane ‏@Xarbi in Mogadishu, an example of interaction on the UNPOS Twitter account.

The excitement of the political process taking place in Somalia was evident in conversations being held by Somalis on different digital platforms and the United Nations Political Office for Somalia (UNPOS) found itself at the heart of online discussion, debate, controversy and rumour. Somalis are proactive disseminators of news inside and outside of their country and in order to engage with this vibrant and dynamic digital chat, UNPOS identified the need to have a direct link with these constituencies.

Twitter is now the leading global social media platform and @UNPOSomalia was established to highlight the Mission's work and public information products. Today @UNPOSomalia tweets provide an alert system informing followers in Somalia and all over the world of the latest political developments. Press statements, media alerts, meeting locations, timings as well as important information during crises are all tweeted from the account. The primary audience for @UNPOSomalia was local media, but it quickly became clear that a wide range of Somalis and other audiences from Hargeisa and Mogadishu to Minneapolis, Toronto, Oslo and Melbourne were following the account and directly engaging with the Mission.

The power of this engagement and the scope of the account's reach was amplified during Somalia's presidential elections. The @UNPOSomalia Twitter account worked in close collaboration with Radio Bar-Kulan, a public service radio station, to tweet events unfolding during the live-stream coverage to a global audience. The Mission's following began growing at an unprecedented rate during the announcement of results. The @UNPOSomalia account increased by more than 120 followers in a matter of hours and audiences grew further with more than 1,000 followers by September 2012.

More meaningful than the increase in followers during the live coverage of the presidential elections, was the opportunity to demonstrate and communicate the sense of change through this digital tool. The UNPOS Twitter account added online transparency to a political process which was representative and Somali-owned and led, showing the world that change has come to Somalia.