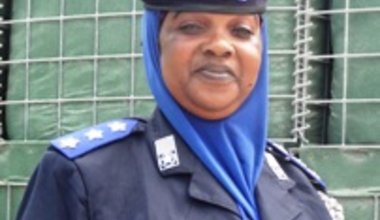 In 1979, newly recruited policewoman, Asha Hassan Hussein, was the first female to ride a police motorcycle to patrol the streets of Mogadishu.

Three decades later in a nation devastated by conflict, now - Captain Asha specialises in tackling violence against women as head of the Somali Police Force's (SPF) Gender Based Violence Department. Captain Asha is passionate about promoting equal opportunities. "Women should get the same opportunities in training and career development as our men colleagues," she said.

Captain Asha explained that policemen trained by her in the past were now in higher ranks: "I have to salute them as they are now my superiors. There is no justice in the department," she said, adding that she hopes the new era in Somali politics would bring with it a fresh mentality on equality in the force.

There is new momentum for the police force which is being revamped following a push by the new Somalia President Hassan Sheikh Mahmoud who has declared security as his top priority.

Consisting of 6,000 police men and women, the Somali Police Force and its leadership are determined to maintain law and order to control crime in this country, which has been virtually lawless following decades of conflict. Training and capacity building of officers is currently underway as well as ongoing rehabilitation of police stations, all supported by UNPOS.

Captain Asha recently participated in a workshop in Mogadishu designed to create a platform for the SPF to discuss issues such as equal rights for women in the force, community policing and human rights. More than 40 Somali police officers and SPF partners attended the workshop, organised by UNPOS on 11 and 12 October. Participants identified gaps in the forces' legal framework and organisational structures. They also deliberated on different ways of improving police efficiency, effectiveness, accountability and professionalism.

"It was fascinating to see young Somali officers, male and female, coming up with innovative solutions to complex policing issues. This shows keenness from the younger generation to face law enforcement challenges in an effective manner," said Azim Arshad, Senior Police Advisor - UNPOS.

Assisting the Somali government in building its security forces is at the heart of UNPOS' security sector work. In partnership with AMISOM and UNDP, the Police advisory team at UNPOS is assisting the Somali authorities in establishing appropriate strategies and coordination mechanisms to help build a stronger police force, promote the rule of law and the effective administration of justice and make Somalia a safer place to live.